Skip to main content
It Takes a Village to Restore a Forest: Tree Growing in Brgy. Awang
Posting Date
2021-02-11
News 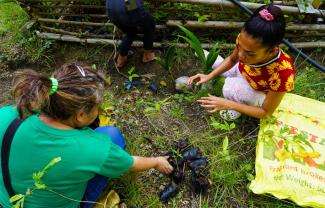 On January 15, 2022, Samdhana staff, together with their kids and volunteers, accompanied the Awang community again in planting trees. (SAMDHANA)

Brgy. Awang in the Municipality of Opol, Misamis Oriental, is part of the traditional territories of the Higaonon tribe under the Dulangan Unified Ancestral Domain (DUAD). The community used to have an abundant forest where underground water sources abound. It was also rich in chromite, that brought in mining companies, migrants and businessmen, and with it logging and clearing of the area, leaving its mountains barren.

Today, what used to be a flourishing forest is covered in cogon grass and perennial bushes. Members of the Higaonon tribe experience shortage in water because of the diminished sources, coupled with the local government’s lack of action to construct an accessible distribution system.

The mothers and the youth need to haul water from the spring or from the communal water tap since there is no water connection direct into their homes.

Samdhana has been partnering with the Higaonon of Dulangan since 2017. In Sitio Panlablaba, Brgy. Awang, Datu Makalamag Marcus Nabatlao leads the tree-growing efforts. He openly shares his dreams of bringing back the abundance of the forest in his community and ensuring the participation of the youth and women.

On January 15, 2022, Samdhana staff, together with their kids and volunteers, accompanied the Awang community again in planting trees. Members of the Panlablaba Youth Organization (PAYO) and Kababaihan sa Panlablaba (KASAP) were present as regular tree-planters.

As one mother expressed, she was pleased with the presence of the youth and her fellow women. She hopes that the very young children who also joined their mothers will learn to appreciate nature. She was grateful that the youth, though there were only a few of them, have continued on this effort, starting from initiating the tree nursery on their own in 2020 and regularly planting trees in the last one and a half years.

For the young ones like Jebie and his friends, they said they always enjoy planting trees despite the school priorities they have. They are happy to be part in the reforestation of their lands as they are also the ones who will benefit from it in the future.

Around 200 seedlings of tugas (Vitex parviflora) were planted strategically at the foot of Panlablaba hill, which is also where a spring from an underground source is located. The area will soon be developed as the new tree nursery of Awang community, to bring them closer to the reforestation site.

To date, there are approximately 3,000 trees that had been planted in Awang, starting in mid 2020. 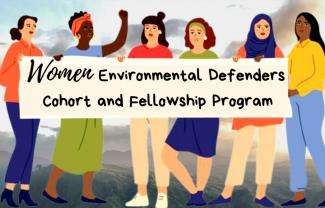 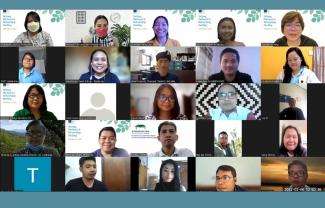 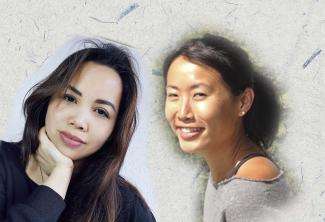 It Takes a Village to Restore a Forest: Tree Growing in Brgy. Awang